A hand-drawn, text-based detective game. Follow the story happening in 1926, question the suspects and make a decision whom to charge of murder.

For this game, I've looked through many vintage magazines and tried to keep aesthetics of cover illustrations from 1920s. I also hope that all outfits are historically accurate:)

P.S. There are 15 possible ending of the game:)

Controller:
With mouse click you can select the suspects for interviewing. By clicking on the notebook icon on the bottom right corner you can open the notebook with brief notes and the action menu.

I've made the game for HD resolution, and if your monitor has non-standard resolution (different from 16:9) the game might look a bit ugly.

P.P.S. Sorry if there will be some small typos or misspellings

browser sadly the words n stuff is so big I am not able to play the game can't get past the first page. sucks. but from the vids people have shared, it looked like it would have made me very happy oh well lol. guess next time I clear my crapy PC with hardly any space for anything I'll download this game and play it then.

oh, sorry to hear. i think you need HD or 4HD monitor to play it

This has been quite an investigation. I liked the build-up of both information and suspicion so finding the murderer was very satisfying. :)

i'm happy you enjoyed the game:)

Ah! A 1920 murder mystery game? Im in! Loved playing it and really enjoyed the artwork.

thank you so much!

I saw this game on the front itch page and I instantly knew it was something you did (same style as Follow the blackbird). I will give it a try!

the resolution is too big, so I cant really play, sad times

i'm sorry to hear, i will upload low-res version after voting is over.

Love the artwork and I'm always a sucker for a good murder mystery. I somehow managed to guess the murderer right on my first try :D

I wish the game had a save function though, so I could see some of the other endings without having to cycle through the dialogue options over and over again.

Thanks for playing:) I'm a fan of detective series too:)

Actually it is not clear how to do that. The ending depends if you question everybody about everybody, so if on the first try you completed the game and accused the right person, from which moment should the game start,  because you already know everything and only thing you could try is to accuse innocent person knowing that he is innocent.  Maybe I could think of some creative solution for the next time:)

The case cracked me.

thanks for playing the game!

The art in this game was beautiful! Well done. I think I would love an option to mute the music, and I couldn't run the game until I fullscreened it - two things to add in the future!

thanks to suggestions! I tried to make music not so loud, but I agree, sometimes it might be hard to focus on reading while music is playing.

Hey erm, I was wondering, what are the 15 endings? There are 6 for the unseccessful accusation of the characters, 1 for if you go home and 1 for (SPOILERS) successfully accusing Nina... but what are the other 7??

You can accuse suspects with if you know their motive or without it. You can also just report no crime and go home. And you can accuse the murderer knowing how he/she did it or not (opportunity). 6*2+1+2=15

You know just putting 'spoilers' on the same line as the spoiler without any attempt at obfuscation is not very effective.

i wish i could try it but the resolution is way too high for my laptop! beautiful art though!

Oh, I'm sorry, I've made it for HD resolution and browser version for 720:(

Nice detective game. I unfortunately guessed wrong, but I still had fun playing regardless. 10/10

Thanks so much for played and streaming the game:)

That was an interesting game!!

First--the art. it's very lovely and I am always partial to non anime styles. The fits went hard. I see the Inspector favors the black suit and tie, which looked good on him. Linda has a more flapper-like outfit (I don't know that much about 1920s fashion). I love her hat. Nina on the other hand wears blue. She is the only one who looks away from the Inspector in the opening scene, almost like her dogs are protecting her. It's cool.

In the beginning I suspected Linda because her father said even he gives her what she wants, the  Baron didn't want her to marry Lofthouse, and the two argued before he died. But I was wrong hahaha and so I decided to play out the events in my head. Nina was the last to touch the drinks, and she had a martini--so she was my next suspect. I reasoned it would not be hard to slip a little strychnine (or whatever) into the martini bottle right after she'd poured her drink. And I believe someone mentioned the bottle was smashed afterwards--disposing of the evidence.

I wonder if the case will come to trial...It is a motive hard to believe. But I feel if Nina's not persecuted via the law, the family might do their own justice.

Overall this was a pretty cool detective game! I liked that I could follow along and try to figure out the killer myself. The art was gorgeous. UwU

thank you so much for playing:) I'm very glad that you noticed these little hits that I left in the game (such as Nina not looking into the eyes), that really makes me happy:) 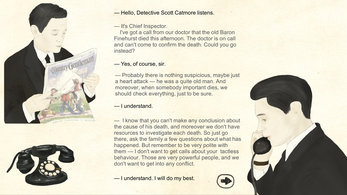 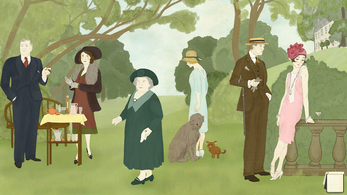 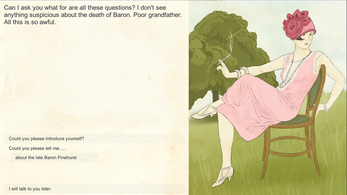 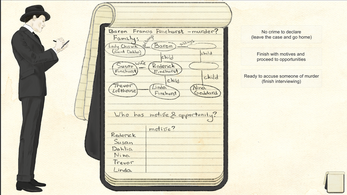